I’ve been told by family, friends, and strangers that I’m so, “lucky to have the life I have.” And while I tend to agree, they don’t always see the downside of being a military spouse.

Or I hear, “Don’t complain about your husband being gone, you signed up for that when you married him.” Um, no. I signed up for a life WITH the man I love. He just happens to be in the military. It doesn’t mean I was prepared or even wanted to be apart.

We started dating when I was 17 years old and my husband was 20 years old. The year? 2003. I had just started at a local community college in Hawaii. 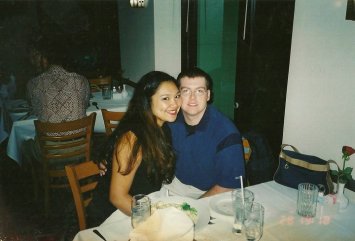 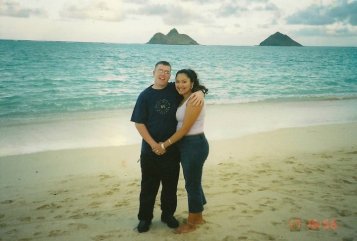 Look at that? We were babies! Hahahaha. Neither of us knew how to be in a healthy relationship, nor did we know what that meant. We just knew we were infatuated with each other and wanted to spend every waking moment together.

So 7 months after meeting, we got engaged and got married! We actually got engaged on the beach. Sounds romantic doesn’t it??? Well it wasn’t. We were talking about the future and the conversation went something like this.

“We should just get married.”

“So lets get married?”

Hahaha. I don’t even know who started it, though it was probably me.

We went to get our marriage license so we could marry and on a whim decided to find a judge and elope. My rationalization was that his family was in Louisiana and couldn’t be with us in Hawaii so it was only fair that my family didn’t attend either. Dumb, right? Well it was. My family was incredibly hurt. Looking back, I can’t believe I did that to them. But we did have a wedding and reception 3 months later.

We had our ups and downs. Lived through multiple deployments, unfaithfulness, moving away from my home in Hawaii, living in different places, and a miscarriage. Life was rough.

Then we found our way to an amazing church, Word of Life Honolulu, Hawaii. Through the guidance and council of our Life Group (bible study) leaders and the leaders  of the church, we found ourselves in God. Once we worked on ourselves individually, we were able to come together and be much stronger as a couple than ever before. Our marriage was strengthened and stood strong on the foundation of God.

Though at this point it was we has just celebrated our 5 year anniversary, people would ask us if we were on our honeymoon! It was the start of our healthy marriage.

After trying to have a baby for 10 years and going through a miscarriage, I was blessed to become pregnant on my last trip visiting my husband in Turkey.

And on November 6, 2014 our son, whom we call JJ, was born. We always knew we were meant to be parents. So to have it come to fruition was a beautiful thing. By the grace of God, I grew this perfect little boy. I believe he has the best parts of each of us.

I’ll go into more detail in a later post but it afforded us the opportunity to travel around Turkey, as well as France, Italy, South Korea, Japan, Hong Kong, as well as around the United States.

That being said, being a military spouse isn’t easy. My husband has served for 15 years and we’ve been married for almost 13. We have been apart a lot during our marriage. 3 deployments, 2 unaccompanied tours, and multiple trainings where he’s been away for months at a time.

We mark our time with where we were living at the time, called Tours. It’s where the Military placed us to live for a few years at a time. Though since having our son, it seems to have been a crazy blur.

Now here we are, a few years later. JJ has just recently turned 3 years old and my husband got promoted to Master Sergeant in the United States Air Force.

Thank you for reading along and if you’d like to know more just comment or shoot me a message.

Today we head to Hong Kong as a family. I know I haven’t written in a while. Actually that’s not true. I’ve written on a few different topics but haven’t finalized them to post.

This is just a teaser to let you know that I appreciate you as a reader and that there are a few exciting trips I will be sharing about. 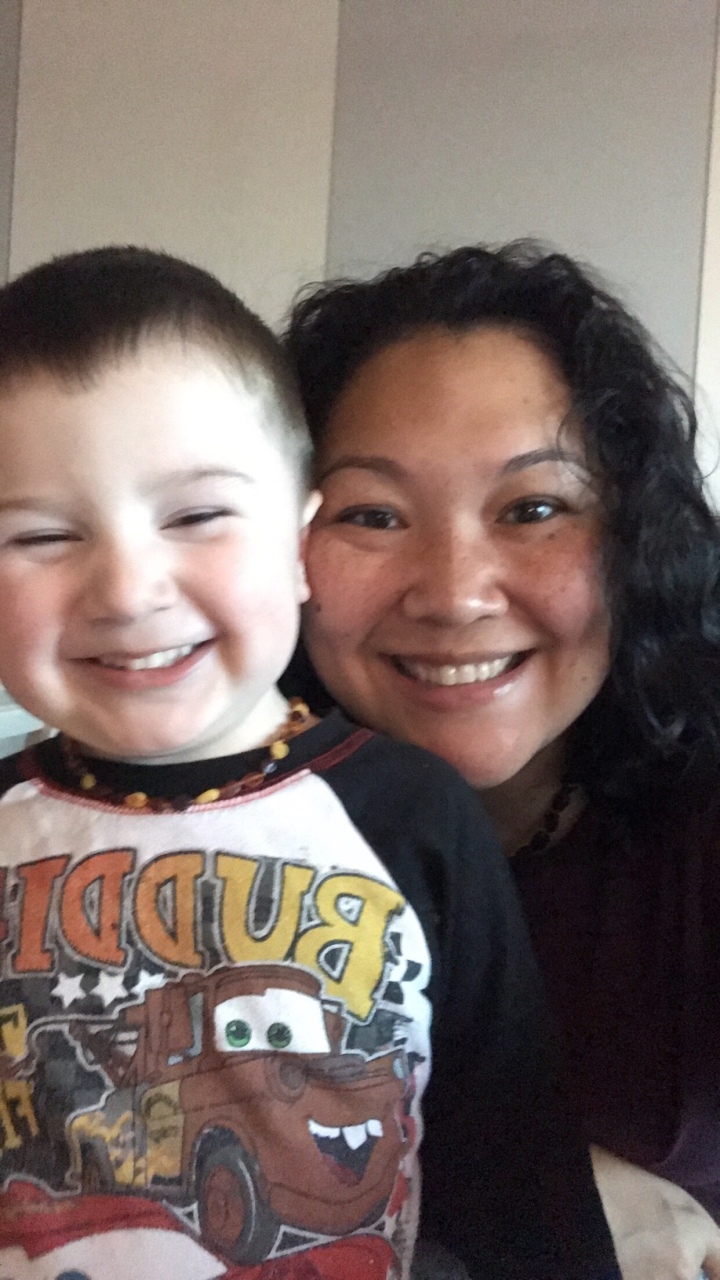 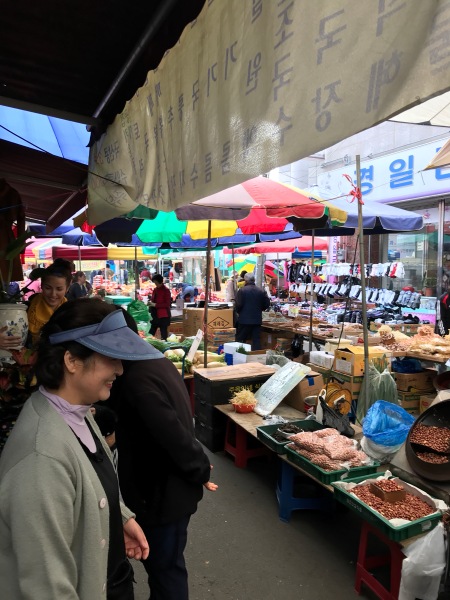 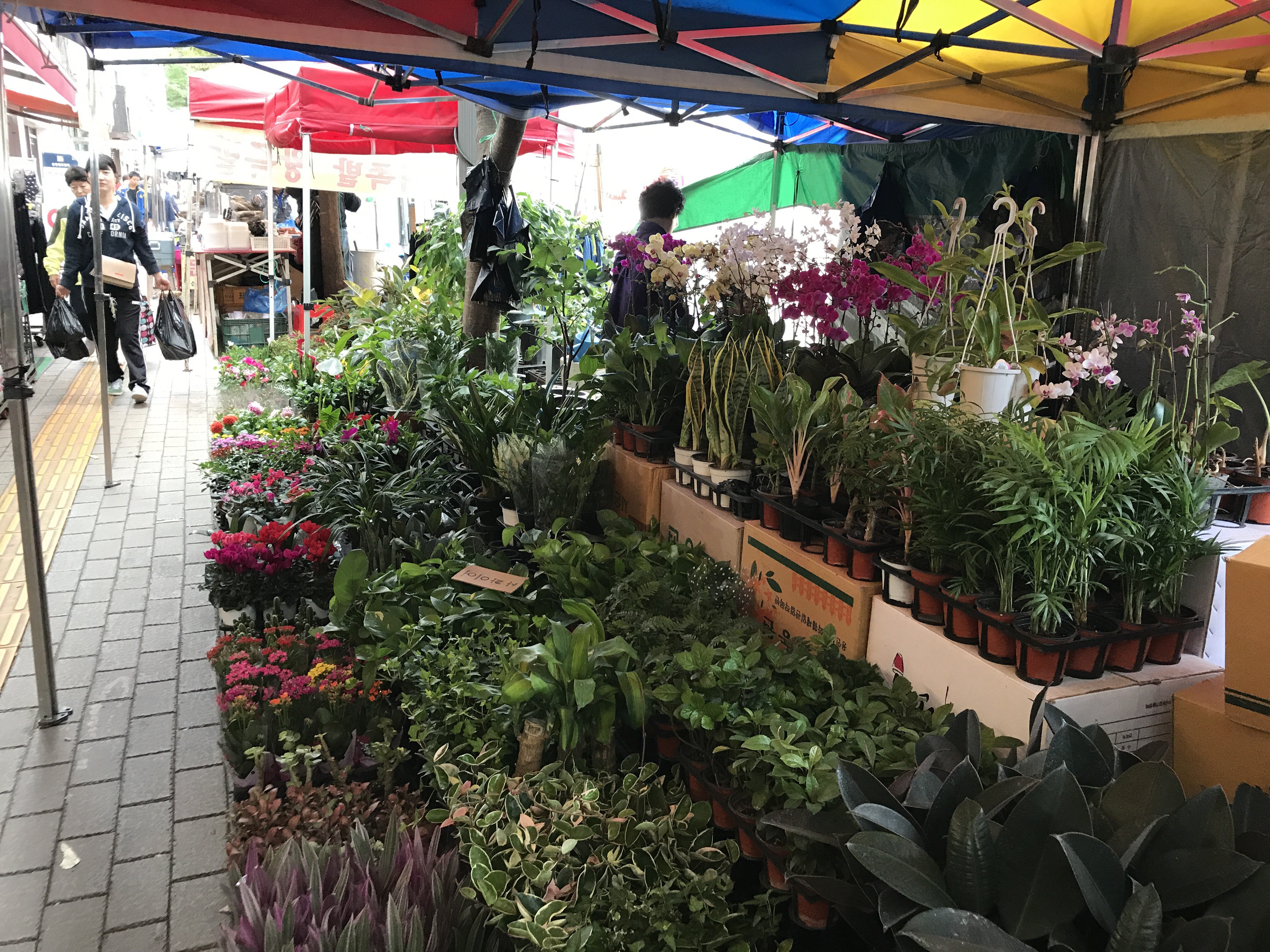 It’s a short walk from our house but a route we never walk so we’ve never seen it before. But once we got there, WOW! The price of fruits and vegetables on base are astronomical. I believe avocado has risen to $6 each, bell peppers are $5 lb, zucchini is $3 lb. So finding the 4-9 Market has been a godsend. 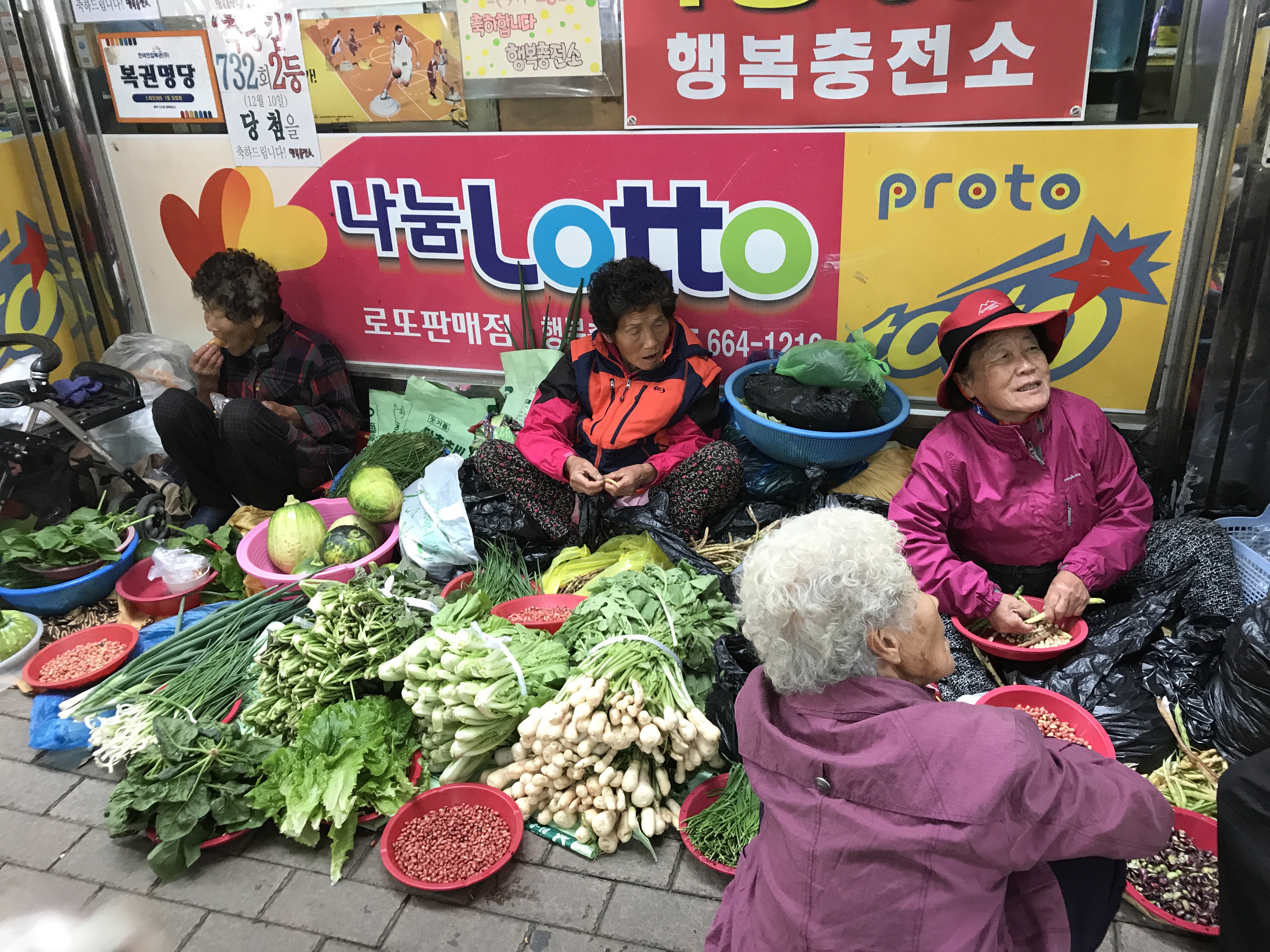 They also sell candies and wafer treats by the lb.

Tons of seafood for sale as well. The sight of the market was breathtaking and chaotic.

Whenever living abroad I suggest trying to shop locally. 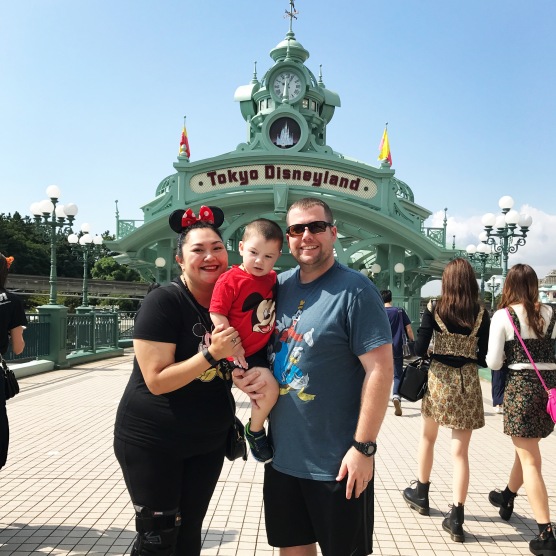 Fun fact: I’ve never been to Disney inside of the USA. Aside from Japan, I’ve been to Disneyland in Paris back in September 2003.

Quick note, I loved Disneyland in Paris. I thought it was magical and what better way to experience Disneyland for the first time than in my favorite city ever!

Now back to Japan. Disney Sea was quite underwhelming. Though they had it broken up into themes, the map was difficult to read and there weren’t clearly marked Disney themed areas. Just a water side, cave area, and such. It was confusing.

I understand that we were in Japan but they didn’t seem to have any food that appealed to Americans. Everything was strange and seafood related. They had a strange seafood pizza and seafood patty in a sandwich. I stuck to fried shrimp and fries. My husband tried the seafood patty sandwich and said it wasn’t bad, just different.

When we left Disney Sea we decided to try and come back to Disneyland in two days so we could take Sunday off to rest, explore more of Tokyo and hopefully avoid the weekend traffic at Disney in general.

So on Monday we left a little earlier and went straight to Disneyland. I could tell right away after walking into Disneyland before we even hit the ticket booth and the actual park that it was already way better. There was no signage at Disney Sea, but there was a huge Tokyo Disneyland sign (as you can see above).

Disneyland was laid out pretty well, the map was easy to follow and they had WAY more to offer than Disney Sea. From rides, games, buildings, and even food! The variety was impressive. We even saw about 10 different characters through out the park. At Disney Sea we only saw 1 or 2.

All in all I HIGHLY recommend Disneyland over Disney Sea in Tokyo.

What Disney parks have you been to? Which is your favorite and why? 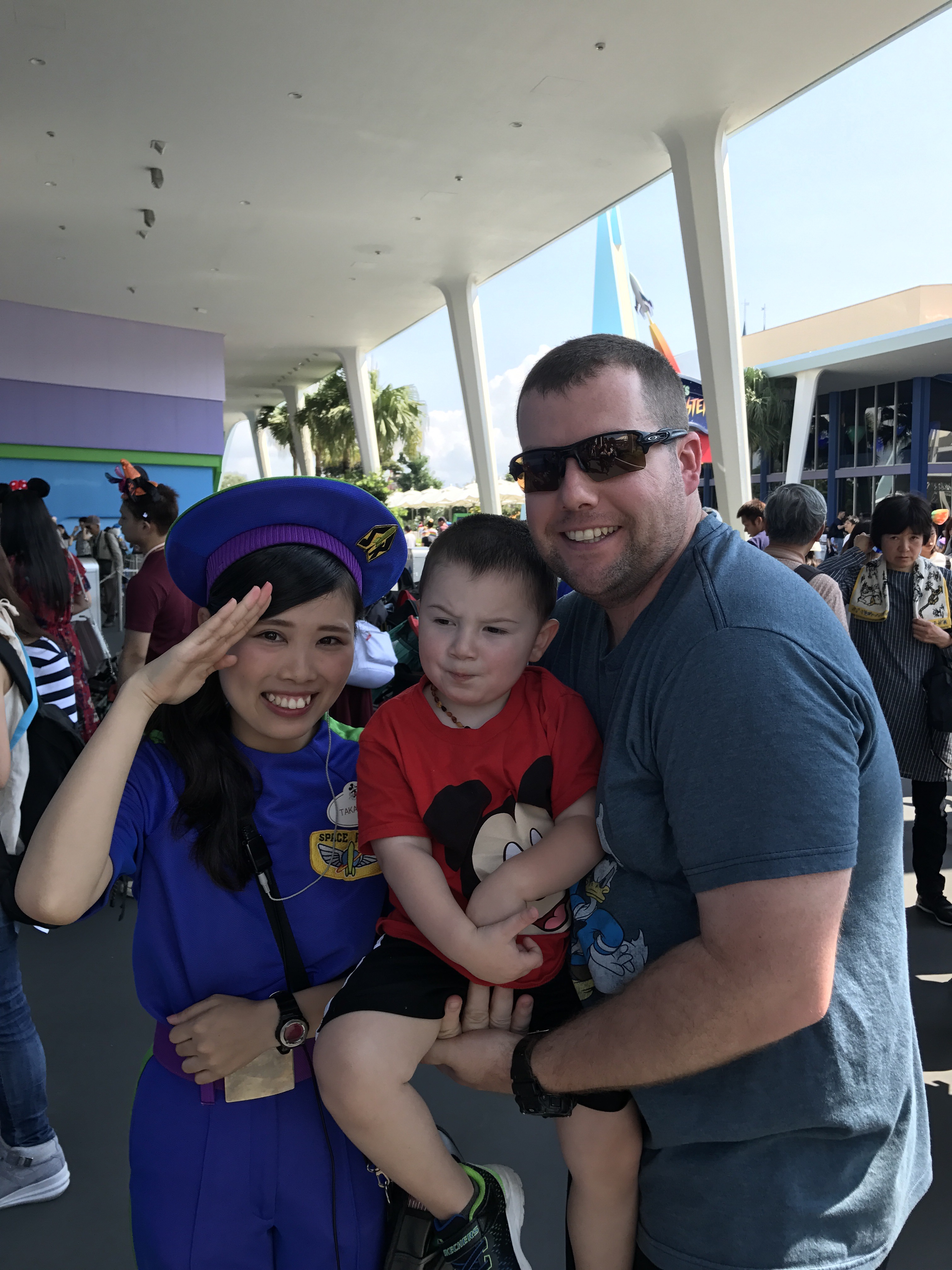 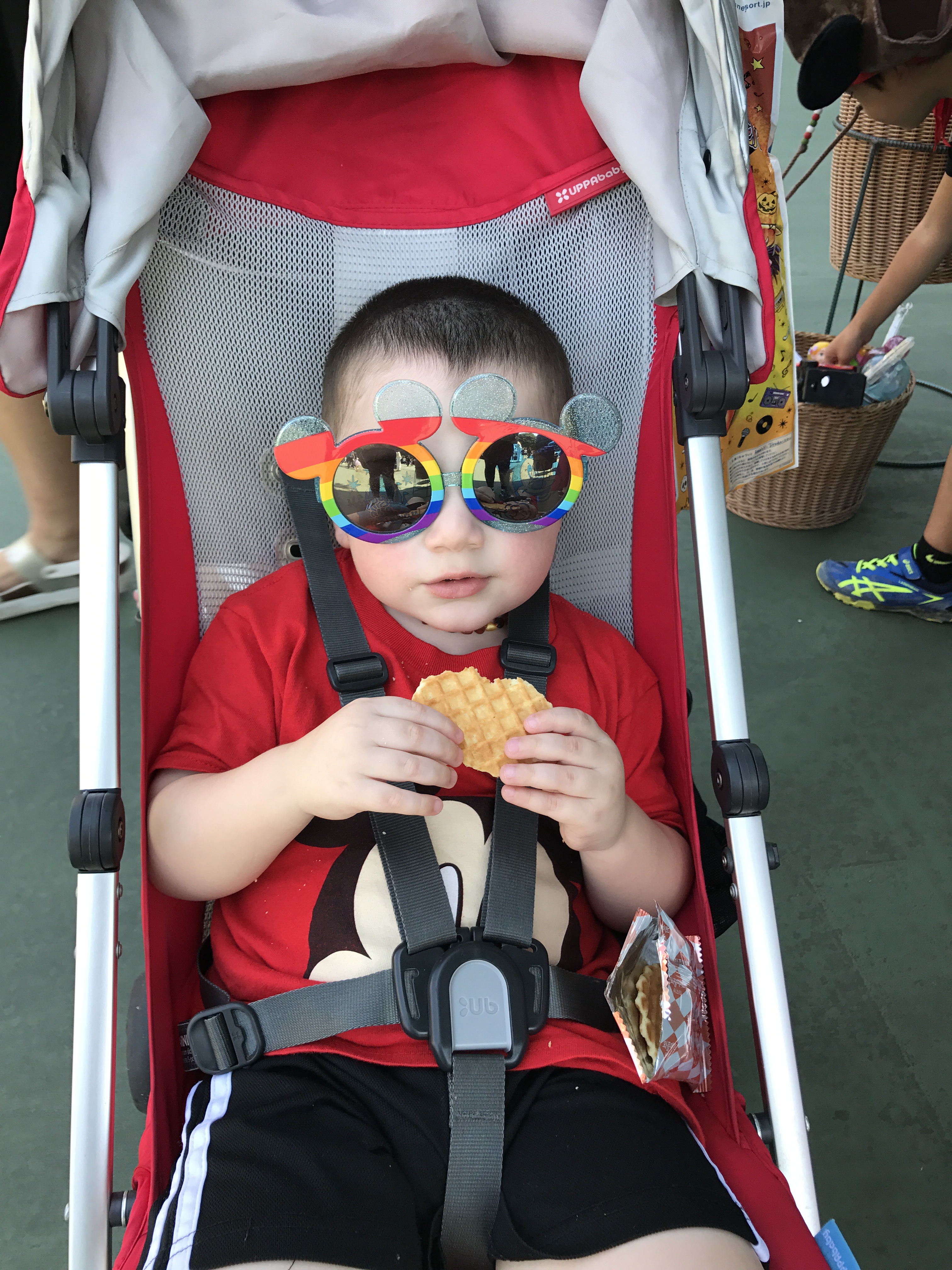 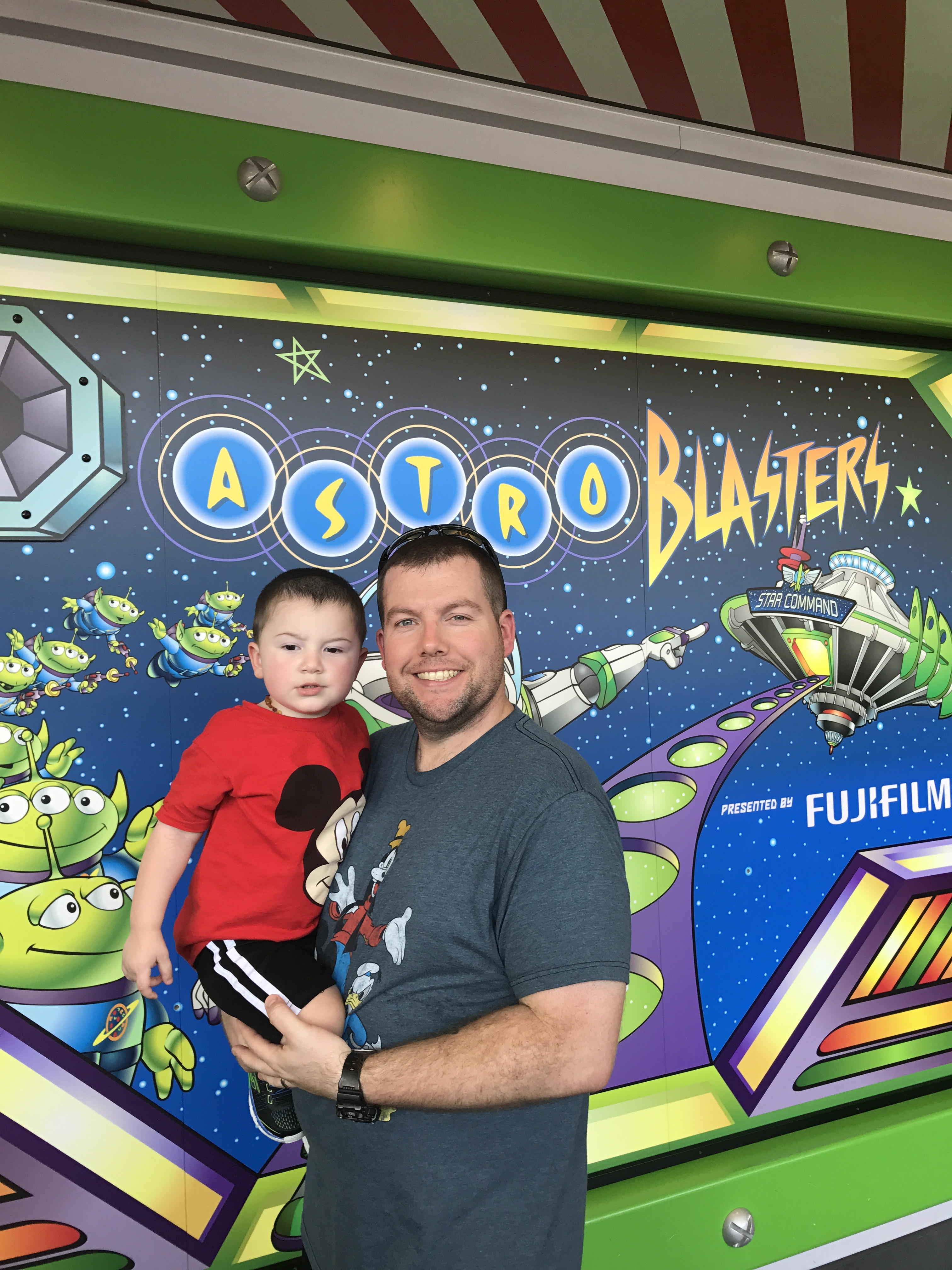 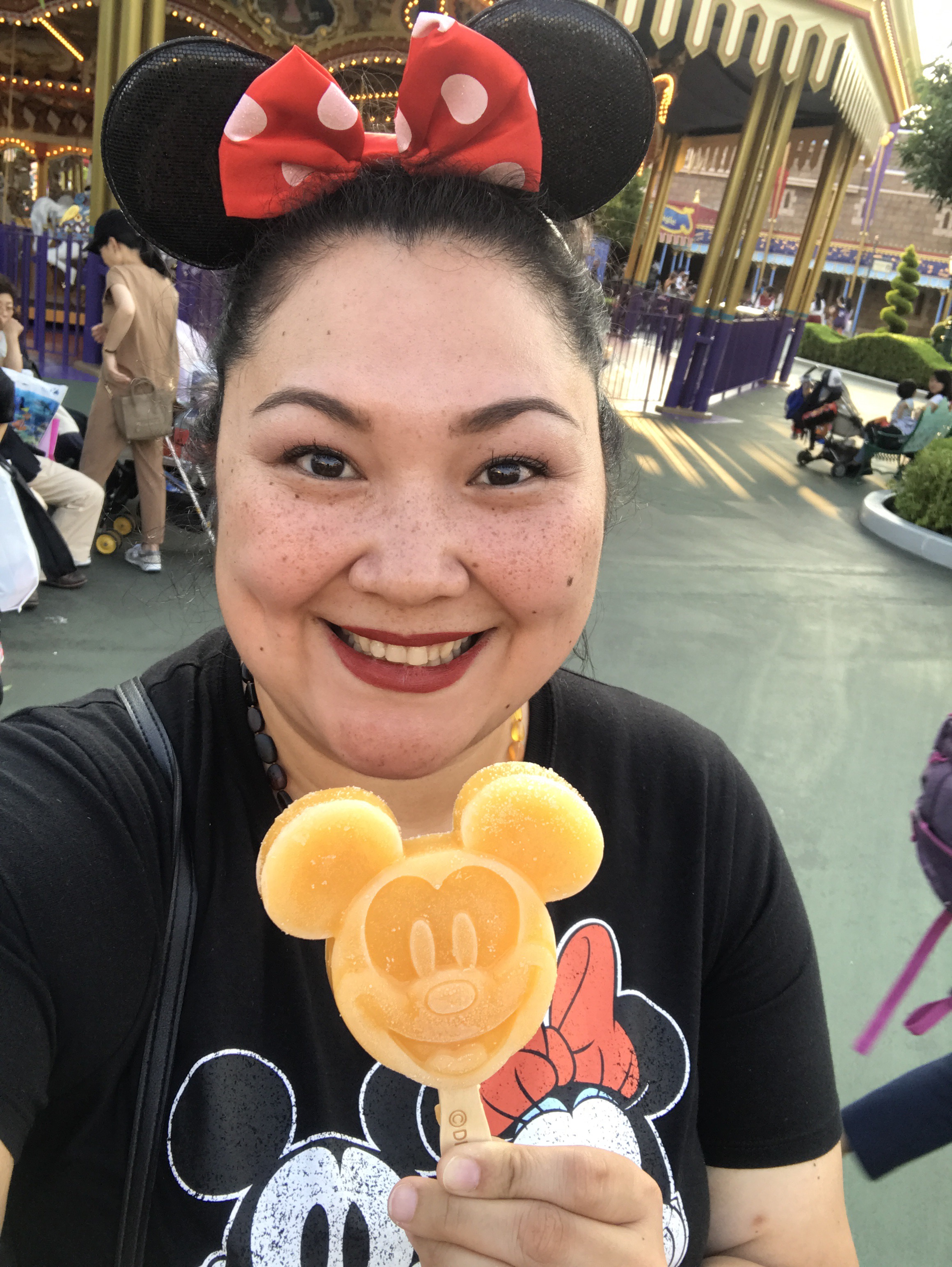 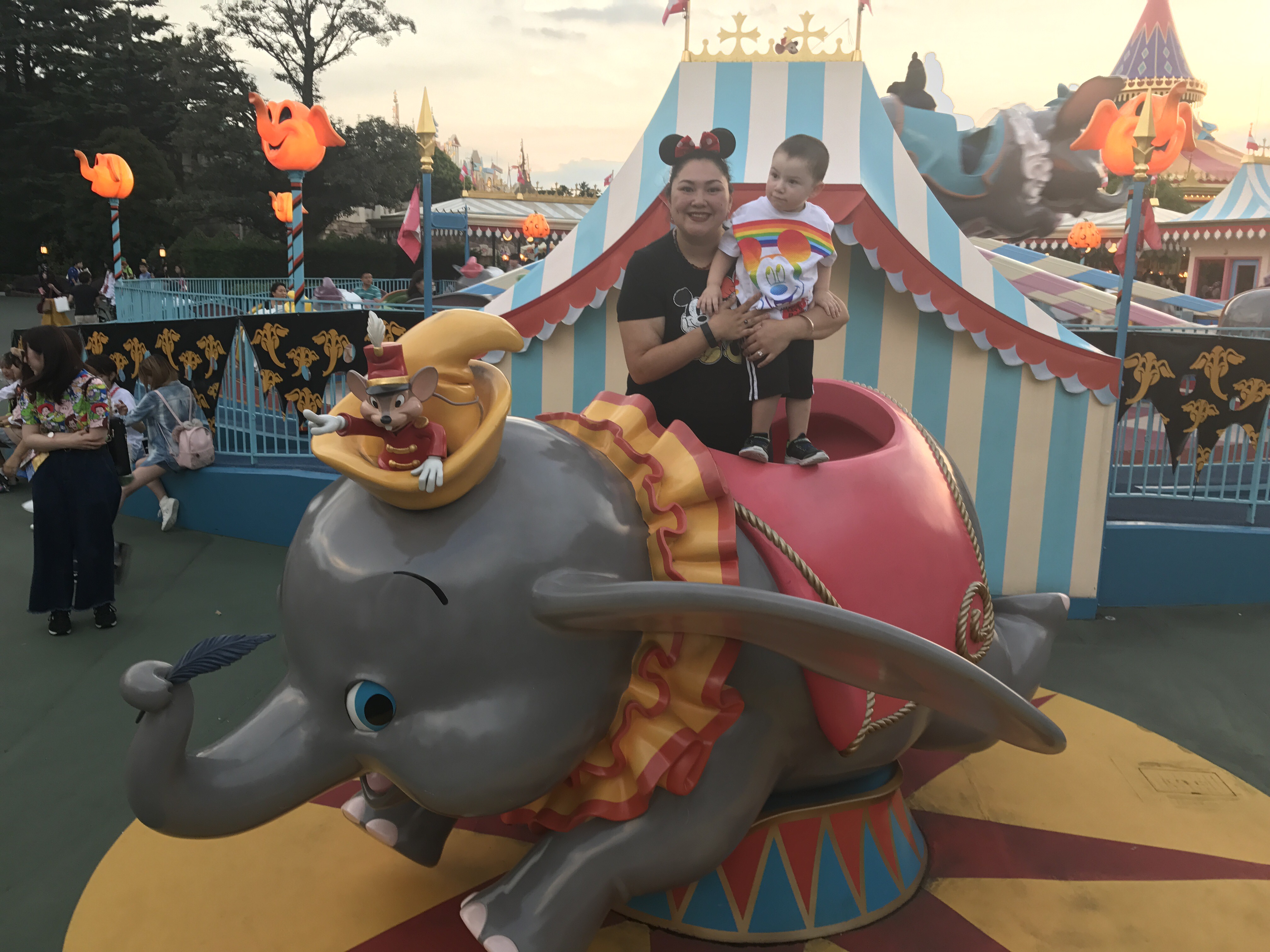 We currently do not own a vehicle in South Korea. We use taxi’s to get around the immediate area and base, but use public transportation to travel to surrounding cities.

There are over 200,000 Americans in South Korea. A lot of that is American military, but there are also tons of students, teachers, and tourists around the country. The majority of schools teach some sort of English, so most people at least understand it, which makes getting around more convenient than I thought. They have a bus and rail system that is fairy easy to navigate.

Be warned, Korean’s have no sense of personal space as we do in America. Prepare to have people stand in your bubble or even cut in front of you while waiting for the train to stop so everyone can enter.

Also, you know those area’s usually reserved for the elderly, pregnant, or handicapped? In America they use it as a ‘suggestion.’ Here in South Korea, the elderly have no problem enforcing it and demanding you stand so they may sit. I actually have seen those seats stay unoccupied even if the rest of the train is full because it’s full of young people. 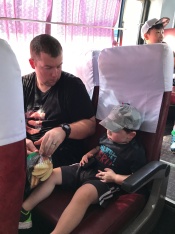 Must have snacks on the bus.

Hubby had to reload his card.

Personal story:  I wear a knee brace when walking long distances due to medical reasons. Well one day as my husband, son (in a stroller), and I were on the train, there was no where to sit. So I stood. I was standing for over 30 minutes and my knee was aching. Apparently the pain was visible on my face and an older gentleman offered his seat. I felt guilty but I was desperate so I sat and thanked him profusely. The kindness of this stranger will stick with me for a long time. As soon as he stood, a young lady sitting next to me stood and insisted he sit back down. He was so sweet and smiled, motioning to my knee. Basically telling me to rest, I assume because I don’t speak Korean.

There is kindness everywhere we go. Don’t be afraid to travel or do something you’ve never done before, you just might find that you enjoy it. 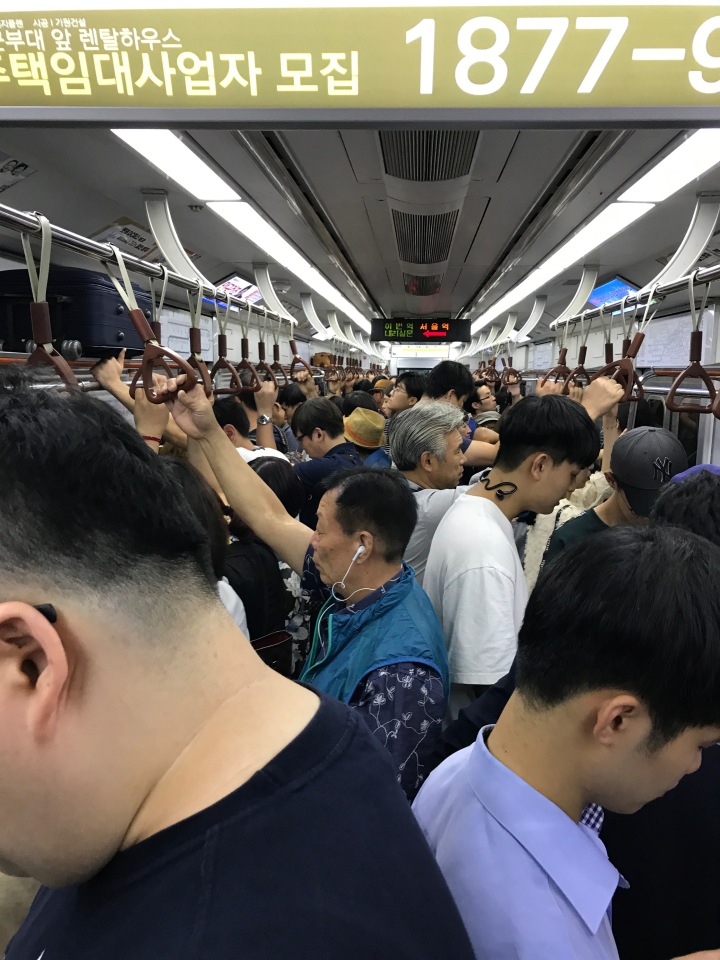 There are two main things to do in Myeongdong, South Korea. Shop and eat. Well today’s post is about the food. A favorite topic of most. I’ve noticed in South Korea they love their protein and veggies, though when It comes to street carts it’s about the protein mostly.

You can get chicken on a stick, lobster, garlic shrimp, and an assortment of drinks. There was a whole street blocked off with two rows of mostly food and drink stands. So many people it was hard to navigate without bumping into someone. 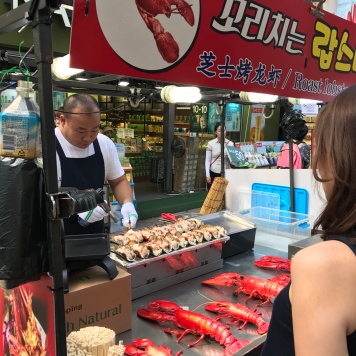 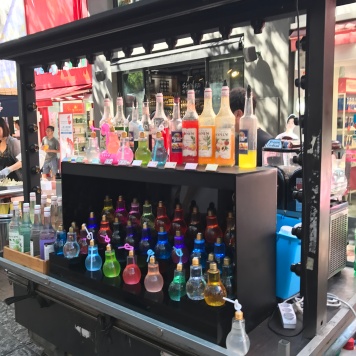 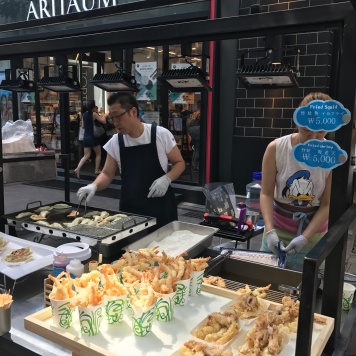 I personally tried the grilled chicken on a stick where I was able to baste it with a sauce of my choosing. It was so tender and flavorful. So much so that I forgot to take a picture!

I did however try the garlic buttered shrimp. Big, juicy, garlicy shrimp.

Another personal favorite was something my husband ordered. It was called espresso milk ice cream. Essentially it was this velvety and fresh milk flavored soft serve, served over a shot of espresso. I could taste how different the soft serve was, it was incredibly smooth and tasty. Not too sweet like normal ice cream. Adding it to the bitterness of the espresso was a perfect combination for a coffee lover such as myself.

To sum it up, come with an appetite and some money. I believe the most expensive item we saw was the lobster, costing 15,000 WON which equals about $13.25. Needless to say my husband passed on it since there were so many other options to choose from.

All I know is that when I go back I’m definitely ordering the espresso milk ice cream for myself.

Aloha! I’m Ashley. Wife to an amazing man in the USAF. Due to his job and life in the military we move around, a lot. Seems to be more than normal. Currently he is stationed in Korea and I’m visiting him for a couple of months.

Take a ride with me as we travel around South Korea and Asia in general. Here’s a sneak peak of some of my experiences right near Osan Air Force Base.

My first real Korean meal. So flavorful and perfectly spicy. 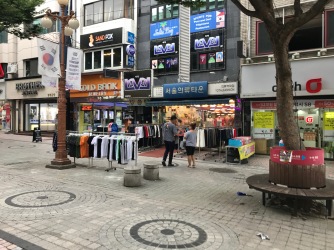 Korea has the best skin care!

Cute grocery store near our apartment.